Maybe this will be the final impetus for my first Autism post.

Jack is Autistic. I may have mentioned it before….. One of the scariest things I think about is that he will grow up some day and go to college, or a dance, or go on a date, or have his own apartment….Oh god.

Watching him play at the park is like social anxiety torture for me. A few weeks ago a group of little girls -little Park Slope Princesses- were running around the playground near Jack. One of them ran up to Jack (wearing a tiara, I KID YOU NOT!!!) and told him “we’re playing house, and you’re the husband!” Jack didn’t care, he flapped his hands at them and continued running around in his very carefully triangulated pattern, as he is prone to do….. The girls didn’t like it, and at first told him Jack that he couldn’t run near their “house” which was a section of the jungle gym. Again, Jack didn’t care. Then they started calling him a monster, and would scream and run from him when he came near them, which he thought was funny, and chased them. This is where I started to freak out a little. After one of them pushed Jack, I walked straight up to one of the mothers with tears in my eyes and told her that her daughter had pushed my son, and that I didn’t appreciate the little princess calling him a monster. To her, I was just some uber-sensitive Mommy but to me, it was a far more complicated situation.

Now, about the post. I remember around the time when Jack was diagnosed, it was almost the end of my second year at Yale. A colleague of mine in the vocal program, we’ll call him Dave, told us that he wouldn’t be giving his first year recital, but would give two in his second year. The reason for this, was that he had always had problems memorizing music due to his dyslexia and ADD, the first year language requirements (4 sets of songs in 4 languages) were even more problematic. Fine, I was sympathetic.

Another colleague of mine, we’ll call him Larry, was PISSED at Dave’s recital extension. Over a few bears at some Irish pub place he said something like “Dave should have never made it passed the admission process. Don’t they screen for that stuff?”

At which point I said something snarky about how everyone has a right to an education, and the IDEA is all over that, etc. To which Larry smartly replied, “Yeah, but this is YALE…”

Yeah, this is YALE, School of Music, VOICE DEPARTMENT, where we earn two credits for yoga, one credit for a weekly coaching with a professional pianist who will spoon feed you your notes if you aren’t smart enough to find Middle C, and a theory class where it is recommended to call a chord pink and sparkly, and not necessarily a German Augmented 6th.. Yeah, the center of the academic universe, not. so. much.

Wait, didn’t HITLER try to do that with like, the world? And like hello, didn’t we all see A Beautiful Mind?

Anyways, April is Autism Awareness Month, and strangely enough, as we were leaving a gamelan rehearsal today with Jack he said “Happy Month of April!” to a friend as a goodbye…. didn’t really think about it until just now, but it’s kind of fitting and cute, huh?

Is that not the MEANEST descending triad you’ve ever heard????? (Jack’s, not mine…)

That’s the response you’ll get if you ask Jack who his favorite baseball team is. At the tender age of four, he can name at least seven “active” players. If you ask him who his favorite player is he’ll say David Ortiz, aka, #34, “Big Poppy”.

Back in 2004 when The Red Sox won the world series, Jack and I watched those games from our living room in New Haven while he sucked energetically on a Red Sox pacifier given to him by my parents. I saved it in his baby box.
Jack has been indoctrinated as a Red Sox fan by my folks, who by birth are Bostonians. I could honestly, to quote my mother, “give two flying figs” as to who wins the World Series, but for Jack’s sake, I hope, now that he’s a fan by choice, Jack gets to see a World Series that he can remember. 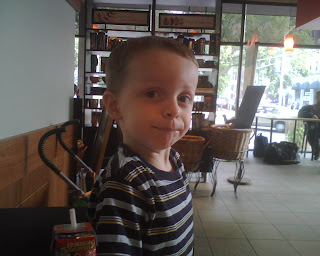 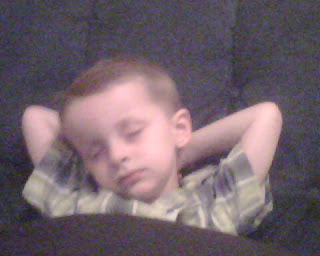 This is what a four year old without a nap looks like at the end of the day…. Pretty cute, huh?
Sent via BlackBerry from T-Mobile 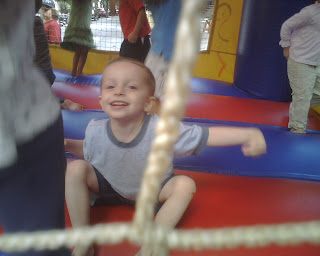 Eternally frustrated at my limitations, I have spent the past hour or so attempting to upload a video to my blog. Can’t do it…. Need to reformat it or something and I can’t for the life of me figure it out…..

Grrrr…. But I did figure out how to blog from my phone which is what I’m doing right now. Sitting in my local (not so local, actually) coffee shop, blackberry at hand, and iced coffee by my side…

This is a pic from this past weekend, which was spent stoop saling and walking around. At one point Matt, Jack and I found one of those inflatable jumping castle things, which surprisingly jack was not afraid of….

In other news, I think I found an apartment, and aparrently I’m not a total whackjob for thinking that my bf smells like Jesus when he doesn’t wear deodorant and ……lipsticks contain aborted fetuses??? Oh, and I got a free coffee from the ironic hipster barista…. Mmmmmmm
Sent via BlackBerry from T-Mobile 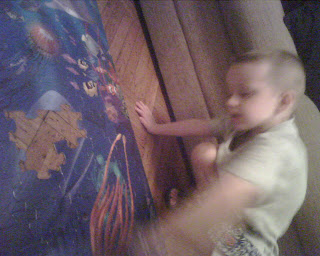 image/jpeg
Sent via BlackBerry from T-Mobile

I received a phone call this morning from Jack’s school informing me that he had a fever and that they felt it was in his best interest to be home resting. I fled work and took the Yale Shuttle to his classroom, where I was greeted by a tearful little monkey, indeed I could hear his shrieks before I even entered his classroom…

Upon seeing me, the tears dried up, his frown turned upside down and he was fine. Was it his Mommy he was missing? I’d like to take credit for this one, but I don’t think so…

We’re home now, he has no fever, is eating and drinking normally, and is presently burrowing himself in a mountain of pillows on my bed. We’re blasting Janis Joplin and singing: translation- my son just faked his way home from school! (the fever thing’s rather impressive, right?)

No complaints here, it’s a beautiful day, it’s a Janis Joplin spring afternoon, and I feel a trip to the park coming on, I’m thinking my little monkey saw the sun shining and had had enough of the alphabet song and circle time, maybe he’s realized how pointless the routine can get, the first thrill of sticking it to the proverbial man. Did I want to be at work, where I’m currently sorting through correspondence of Colonel Leonard Pickel (real name)…. no I did not.

I hear ya little man….thank you.