My sister and I had a John Cusak marathon last night…. and yes, he is in Sixteen Candles, as one of Anthony Michael Hall’s geeky friends. It has to be at least ten years since I’ve watched it, but I know every line, every pause, the soundtrack cues, and how many seconds are between the last line Samantha delivers before she finally moves her arm and Jake Ryan plants a sweet one on her.

These three minutes have been etched in my mind as the end-all-be-all birthday experience…. abandoned at a family gathering, cars pulling out of the church driveway in every direction revealing beautiful boy and his beautiful car…. “Me?” she says, “Yeah, you” he says …….
and then the birthday cake on the kitchen table….. “Happy Birthday Samantha, Make a wish”….” It already came true”…….kiss, cue 80’s music….. *Melly swoon*

John Hughes, man……. No one captures those middle-class-American -this-is-what-your-life-is-supposed-to-be-like snapshots quite like him. 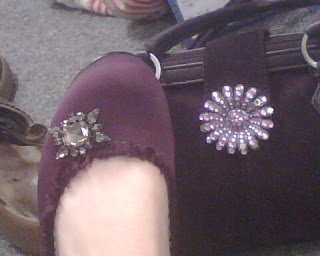 Why must you make pretty sparkly things??????

The little voices in my head are screaming Buy me!! Buy me, I'll make you happy !!!!! Buy me, I look so nice next to your thrift store purse!!!!!!! Buy me, look how your Birkenstocks cower to my sex appeal!! ! Buy me and you'll be a star!!

Sent via BlackBerry from T-Mobile 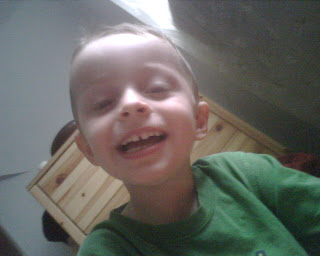 I’m with my monkey, so I’m not blogging too much this weekend…. but I leave you with the following threads…..

REAL SEX Wet n Wild…..come on you know you want to look!!

Finally….. why I’m not crazy for liking the man musk…

Halloween was always really exciting for me as a kid… as I’m sure it is for every child, but growing up Southern Baptist in suburban New Hampshire (insert your chuckle here) meant that going trick-or-treating was somehow rebelling against the church, and in the name of F-U-N, my parents let us do it, as long as we were quiet about it.

Through the years I was a leopard, a Cabbage Patch Kid, an orange Crayola Crayon, and a downhill skier. Growing up in New Hampshire meant that you always wore footy pajamas or long-johns under your costume, as the ground was always frozen by late October, so you’d have to imagine that French Maid number with polar fleece under it and you get the idea.

I haven’t really thought too much about Halloween costumes until last year when I went to Jack’s Halloween Parade at his Elementary School. He was supposed to dress up for the parade, and his Daddy bought him this heinous Woody from Toy Story costume. This thing was so cheap, and Jack at that point had no idea who Woody was… I had made myself a costume out of an old evening gown and a pair of butterfly wings and a fairy wand. (I was a fairy godmother, naturally!) Jack was OBSESSED with these wings and would ask to wear them around the house from time to time.

So I was a little torn as to what the right thing to do was. Society and his Daddy wanted him to wear the cowboy costume, and I just wanted him to be happy. He looked so cute as a little butterfly….but I folded to avoid conflict.

So today in my Google Reader I came across this site for costumes. I’ll provide two links here. The first one is the girl occupation costume site. Now I’m not gonna sit here and say that the skanky-esque costumes for little girls don’t bother me, they do, but what really infuriates me is that in the dozen or so costumes that they offer for girls under the occupational heading, there are five or so “entertainers”, a maid, a nurse, a flirty officer, a waitress, and a Hollywood Starlet???? (I think that’s code for, I dress up nice and go down easy) Of course under the boys occupational costumes are various forms of police officers, a marine, an air-force pilot, SWAT team member, boxer, and NASCAR driver, and of course the obligatory doctor.

Translation: Little girls should grow up to entertain and take care of us, and boys will take care of business, so to speak. Isn’t it time to stop perpetuating these gender stereotypical myths?? Ask any third-grade girl what she wants to be when she grows up and I’m sure it won’t be limited to American Idol contestant, or candy striper…. no, she’ll want to be president, and a teacher, and a doctor.

So, if the kids aren’t buying that crap anymore why the hell are you still selling it? 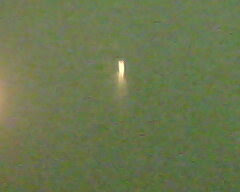 You can't really tell by the quality of the cell phone pic, but that is the jay street/borough hall station f track…. On fire.

Matt and I were coming back from a Haydn concert I sang with the Clarion Music Society at 99th and Amsterdam. Although we were a little but tipsy, it still seemed a little off that we smelled smoke on the platform when we got off the A, but no one seemed that alarmed at the fire in the tunnel!!!! A girl ran up to the booth area to tell someone and Matt and I decided that before we got the hell out of there we needed to take a picture. I got as close as I could, and as soon as I took this one a huge chunk of debris fell onto the track and we booked it.

Precisely one bus ride, a sausage egg and cheese on a biscuit and a chocolate cream donut later, we decided to hit the ATM and cab it home…

Sent via BlackBerry from T-Mobile

My blog received 5!!!????votes for Hottest Mommy Blog on the Bloggers Choice Awards….

So the big question is, who’s reading my blog and who voted for me ??? I was kind of diggin’ the fact that my blog was only read by my bf and my lil sis’. Mafoo swears it wasn’t him, so who are the other 4????

That’s the response you’ll get if you ask Jack who his favorite baseball team is. At the tender age of four, he can name at least seven “active” players. If you ask him who his favorite player is he’ll say David Ortiz, aka, #34, “Big Poppy”.

Back in 2004 when The Red Sox won the world series, Jack and I watched those games from our living room in New Haven while he sucked energetically on a Red Sox pacifier given to him by my parents. I saved it in his baby box.
Jack has been indoctrinated as a Red Sox fan by my folks, who by birth are Bostonians. I could honestly, to quote my mother, “give two flying figs” as to who wins the World Series, but for Jack’s sake, I hope, now that he’s a fan by choice, Jack gets to see a World Series that he can remember.

Seriously, I had a pretty shitty week. I’ve spent far too much energy hunting down a check for a gig that I spent far too much energy organizing rehearsals for, and as a result of that missing check and the fact that I handed over a shitload of money that I worked my ass off to make to my new landlord, I’ve been REAL poor, like my checks were bouncing off the walls poor, and think I may have gone 24 hours without eating between yesterday morning and this afternoon… I also dealt with some real petty bullshit in a rehearsal this week that was so incredibly childish and immature it does not warrant describing, and I was called a slut while walking down my street. Kensington does not share the same appreciation for my love of fishnets.

I still haven’t figured out how to be superwoman yet. This week I had myself pretty convinced that I was a shitty Mom, a crap-tastic lover, a fair-weather friend, a scatterbrained sister, an invisible daughter and a dangerously close to being out-of-work singer. I was so down on myself that tonight, when an A train (which had no business being where I was, and confused a lot of passengers besides myself) appeared at the Broadway-Lafayette stop , I sort of wondered if I was supposed to throw myself in front of it….. Ok, not really.

At the end of the day, my bathtub doesn’t judge me, and it’s amazing how good you can make yourself feel when for one moment you are the only person whose needs you are responsible for…….

But ya know what? That’s the thing about relationships, whether they be mother-daughter, friend to friend or the harder kind…. it’s always easier to take care of your own emotional and physical needs because they’re your own. It’s quite another to undertake the well-being of a friend struggling with depression, an autistic son, or a relative struggling with cancer… But it’s a real lonely life when we don’t reach out and try to share in each others joys and sorrows.

So tonight, I retreat to my bathtub, and pull the covers up over my head, and remind myself that it’s okay to fail day in and day out at life, because I’m still in the game, and I refuse to meander mindlessly through the motions. Tomorrow’s another day, and I’ll still be playing.