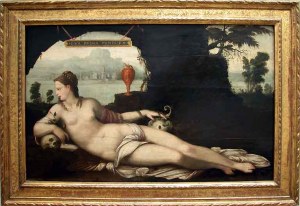 A young woman reclines in a suggestive pose, one elbow cradling a skull, while the other rests comfortably on the lid of a decorative but non-specific jar. The painter has depicted this young woman with fair creamy skin, breasts small but firm, and hips and limbs with supple muscle tone. Her gaze is modestly to the side, exposing a lean elegantly seductive neck. Resting on luxurious fabric that wraps around her arms and her hips, she lounges beneath the shade of a tree in a sumptuous garden while a stream murmurs in the distance. This feminine beauty could be the likeness of Venus or any other goddess, but a plaque placed above her head proclaims EVA PRIMA PANDORA, or EVE, THE FIRST PANDORA. Under this title her gaze takes on a slightly different affect. While not looking the viewer straight on, her coy sideways glance suggests a sexuality and sensuality of which she is unaware. The skull, while morbidly out of place, now seems a clear reference to our human mortality. Similarly, the presence of the jar carries more significance. This is no ordinary wine jar; it is meant to suggest the jar of Pandora, and the casual manner in which her hand rests on its lid is symbolic of Eve’s congenital curiosity, and of that curiosity’s consequences for mankind.

For centuries, Eve and Pandora have been placed alongside one another. Scholars have scrutinized the narratives of their creation and the motivation thereof, their legendary ‘dangerous beauty’, and their epistomophelia, or drive to curiosity. These two mythical women, who both lay claim to the title First Mother, were likewise both blamed for the downfall of humanity within moments of first meeting their beloveds’ eyes. Their seductive charms and illicit curiosity have profoundly impacted social attitudes towards women, just as their original disobedience has served as a blueprint for characterizing and vilifying Woman.

The female sexual organs have long been a subject of morbid fascination among Christian scholars. This is largely attributable to the early writings of Church fathers like Augustine, John of Chrysostom, Aquinas, Tertullian and Justin the Martyr, who, as part of the 4th century ascetic movement, which consisted of rejecting worldly pleasures, contributed much to the glorification of virginity. By praising virginity for its individual holiness, these powerful men were acting as both heirs and agents of the Roman Empire, which likewise promoted virginity as the primary vehicle for refusing carnal temptations. These scholars wielded their pens in slander against women as they continued to wage a cultural war between the flesh and the spirit. To reinforce the Church’s patriarchal morality, it was essential for the Church to link the origins of evil, sin and sex with the female gender and its reproductive role. If childbirth was the woman’s postlapsarian duty, and the pains associated with labor her curse, it was a logical step to extend the shameful darkness of her womb to the whole person, a concealing of the feminine in a secretive darkness like that imposed by veiling: “Veiling implies secrecy. Women’s bodies, and, by extension, female attributes, cannot be treated as fully public, something dangerous might happen, secrets be let out, if they were open to view….. The secrecy associated with female bodies is sexual and linked to the multiple associations between women and privacy.”1 Only in 1854, with the acceptance of the dogma of the Immaculate Conception, did Christian theology revise its views on the sinfulness of childbearing itself, but many of these attitudes have nonetheless endured.

Beginning with Augustine, who was particularly entrenched in questions of the origin of sin, the fathers of the Church have viewed woman as the cause of the Fall. She is, by her nature, an evil seductress, the collaborator of Satan, and the ruin of the human race. The wrath released by Christian thinkers against Eve and all women can seem almost flattering, so embellished is their picture of a creature so supremely charming, so deadly, that man cannot resist her. Tertilliun declared with Latin spitefulness that echoed the early chronicler Tacitus: “Do you not realize, Eve, that it is you? The curse God pronounced on your sex weighs still on the world. Guilty, you must bear its hardships. You are the devil’s gateway, you desecrated the fatal tree, you first betrayed the law of God, you softened up with your cajoling words the man against who the devil could not prevail by force. The image of God, Adam, you broke him as if he were a plaything. You deserved death, and it was the Son of God who had to die!”2 Woman, thus held responsible not only for the Fall, but also for Christ’s suffering and sacrifice, is at once derided and yet seemingly empowered by her crucial role in shaping human existence.